Representatives of the BSIA have once again expressed the industry’s frustration with delays to introduction of the new Security Industry Association’s regulatory regime.

The “phased transition” to a new regulatory regime for UK security guarding licensing has been ongoing since October 2010. The Security Industry Authority (SIA) has announced this week the timescale for licensing of security businesses. From April 6, 2015, all regulated security businesses will need to hold an SIA business licence.
Security businesses will be required to hold a business licence in each sector they work in, which will comprise of:
The application process for SIA business licences will open on April 7, 2014, and businesses are advised to apply by no later than October 1, 2014. Otherwise they will risk not having their application processed in time for April 2015, when the licences will become a legal requirement.
BSIA chief executive James Kelly has welcomed the announcement of the proposed timescales, but has said that there are still “several factors” that the Government has yet to clarify that are crucial to the success of the transition to business licensing. He said:

Firstly, the Government has yet to identify a suitable legislative vehicle through which suitable enforcement powers can be granted to the SIA. Also, the failure of Government to clarify the cost of the new regime is leaving many security companies in the dark when it comes to business forecasting for the coming years.

In his role as chairman of the Security Regulation Alliance -- a single-issue alliance of stakeholders that focuses on the regulation of the security industry -- Kelly has written to the government to say that the new regulatory regime will be “helpful to business” but that the Alliance is concerned that the Treasury and the Department for Business, Information, and Skills (BIS) are delaying the introduction of the regulation.

Concerns from the treasury about the cost to the taxpayer of the new regulatory regime have caused delays. There is also a perception that the new rules are contrary to a general government policy of deregulation. Kelly continued:

Our letter aims to provide reassurance that the cost of licensing has always been -- and will continue to be -- borne by industry, and that regulation has, in fact, had a positive influence on the security industry.

Kelly wrote in his letter:

The new regulatory regime will be good for all businesses, reduce cost, help build a private security industry that is fit to hold the public’s trust, and support the police. However, this will only be the case if all phases of the new regulatory regime are completed with proportionate powers that allow robust enforcement to be continued. If, as seems possible, an incomplete process without primary legislation is enacted, it would be damaging as long as the uncertainty persisted.

The Alliance pressed the benefit of regulation in encouraging competition in the industry, saying that before the SIA introduced regulation the only way a company could screen suppliers was through reputation -- a situation that would prevent new businesses being able to build up credibility.
Business licensing will be subject to ministerial approval, and businesses will have to prove that they are fit and proper to supply security industry services.

For information on the products and services we offer at Security Alert please visit us online - www.securityalertuk.co.uk
Posted by Security Alert UK at 05:00 No comments:

As an SIA approved Security Company, here at Security Alert we can offer a specialist mobile patrol service. Our fully uniformed guards will patrol your site in our sign written Security Alert high visibility vehicles.


This service acts as an instant deterrent to any intruder that may want to illegally enter your premises and we will also log all site visits and mobile patrols, so as customers, you can monitor the level of security needed on a weekly basis. Find out more by visiting our website. 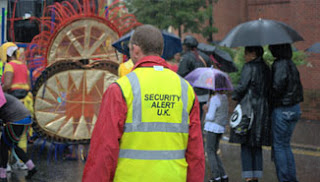 Posted by Security Alert UK at 03:49 No comments:

With over 20 years of experience in event management and security, Security Alert are proud to say that large and small events are our speciality. We use 120 of our highly trained event staff for the duties of close protection, door supervision, and control room operations for our large events like the Leicester Caribbean Carnival. If you would like to find out more about our event security please call us on 01332 367453, or visit our website.

Posted by Security Alert UK at 07:09 No comments:

At Security Alert we provide first class manned security services and offer professionally trained manned guards for the following: shopping centres, building sites, schools and so much more. We speak to our customers on a weekly basis to review the security needs for each individual site. If you’re looking for a security company to exceed your expectations, call us on 01332 367453 or visit our website at:http://www.securityalertuk.co.uk/index.php?webpage=mannedguards 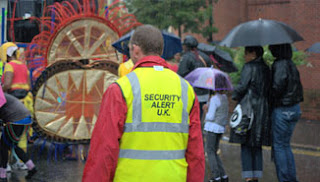 Posted by Security Alert UK at 08:51 No comments:

We can provide fully licensed SIA door supervisors, for any event which you should require. Our experienced and highly recommended staff can guarantee maximum safety with minimum fuss, as they’ll take a backseat observing to ensure any potential issues are resolved immediately. Find out more by visiting our website.

Posted by Security Alert UK at 02:41 No comments:

We have provided an event security service for many different clients. Our service is tailored and adapted for both small and large events, including art shows and hired parties. Our fully trained and certified security guards are experts in ensuring safety and understand how to keep functions running smoothly. Find out more by visiting our website. 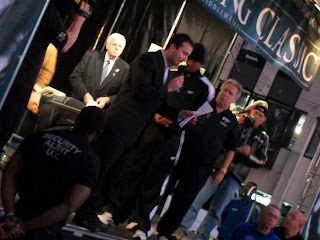 Posted by Security Alert UK at 01:35 No comments:

Security Alert UK
Hello and welcome to our blog! Security Alert is a Midlands based company in Derby which formed in 1997. We are a privately owned British security and risk Management Company with substantial experience within the security industry. Security Alert has grown from its humble beginnings to be a national focused organisation, offering specialist, professional, security services from basic Key Holding duties to large multi-manned events. As well as manned guards we are also able to provide Security Dog Units, and Close Protection. We offer comprehensive advice on every aspect of security and our clients benefit from the extensive capabilities of our Security Guard personnel, and their wide breadth of knowledge and experience of all aspects of the security industry. You can be confident that Security Alert will provide you with a confidential and professional service at all times. Please feel free to contact us anytime using the following contact details. Security Alert u.k. ltd Lynton Mill House Lynton Street Derby DE22 3RW 24hr Office: 01332 367 453 Fax: 01332 368 541 24hr Mobile: 07969 187 390 Email: securityalert@securityalertuk.co.uk

Promote Your Page Too 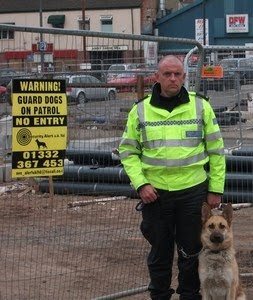